Every entertainment company prides itself on thinking “outside the box.” But talking about it and actually doing it successfully are two different things. Where do the creative efforts go wrong? Is there a better way?

When faced with the challenge to push the theatrical envelope, many creatives – producers, artists, designers and managers – often allow the status quo to dilute their work. The showHive team takes a different approach to getting more creativity on stage by recognizing the problems that stifle creativity. showHive’s creative development team focuses on disrupting the process, and the results are transformative. In this article, the creative team takes a look back to give their perspective on different ways this was accomplished.

showHive shows are conceived in the same way as a Broadway show, it all starts with the script. “Developing detailed treatments, scripts and story-boarding have been important tools for evolving showHive’s productions into a more immersive theatrical experience that feels cinematic and relevant to the audience,” said Emmett Murphy, showHive’s creative leader.

These assets help inform the entire cast, production and creative team. Performers have a stronger understanding of their motivation, the composer has a musical sketch to orchestrate, the show’s designers have detailed creative information to work with, and the audience can sense a purpose within the entire production.

Choreographer Jennifer Savelli remarked on the scripting process, “The attention to detail and passion for storytelling and fine work ethic made the creative process go very smoothly.” Savelli goes on to say, “Emmett’s support and matched enthusiasm for brainstorming and keeping an open mind to even obscure possibilities allowed ideas to flow beautifully.”

showHive also develops story boards and pre-visualization collateral to map out creative concepts. As an example, Luther Mosher, a storyboard artist from Brooklyn, NY, was enlisted to help develop an innovative scene that re-imagined the iconic 1980s music video “Take on Me” by A-Ha. Luther notes, “Storyboarding is an extremely important part of the creation process. Working on this project came with some unique challenges. The vignette in the show that I rendered helped conceptualize the logistics of how the live performers would interact with treadmills and LED screens. I had to approach this with a very different mindset.” In the production sequence “Take on Me” the live actor remains stationary onstage, but the digital scene and animated characters move around him. “I worked with Emmett to pre-visualize the action and create a design style that became the blueprint for the creative team. It’s exciting to see how the vision of a storyboard artist can impact the final performance.”

Renderings and performance photographs for “Take on Me” storyboarding project 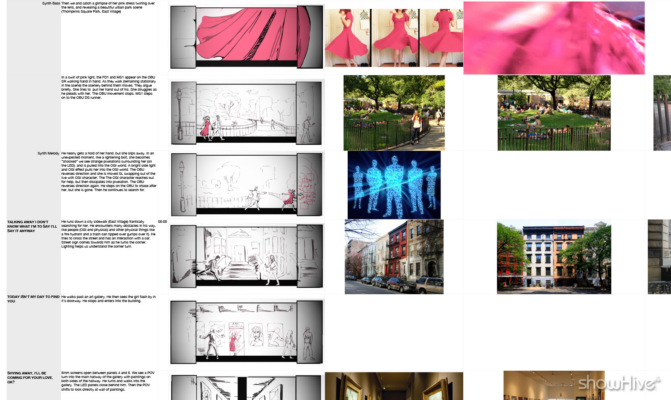 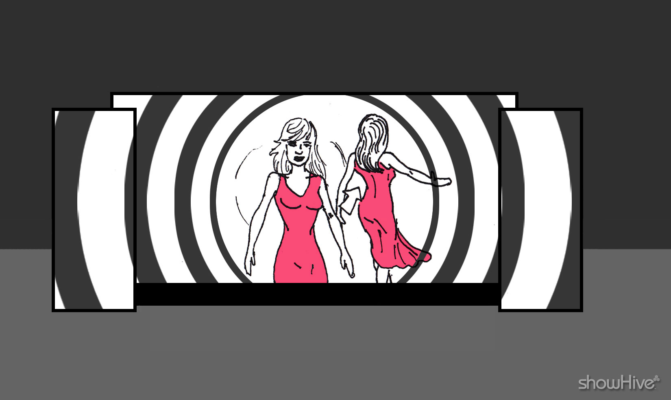 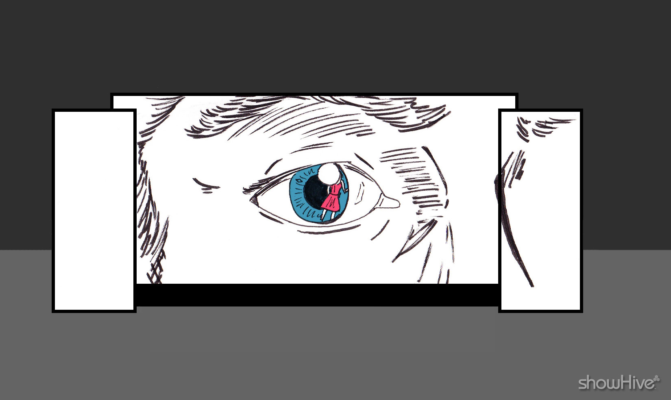 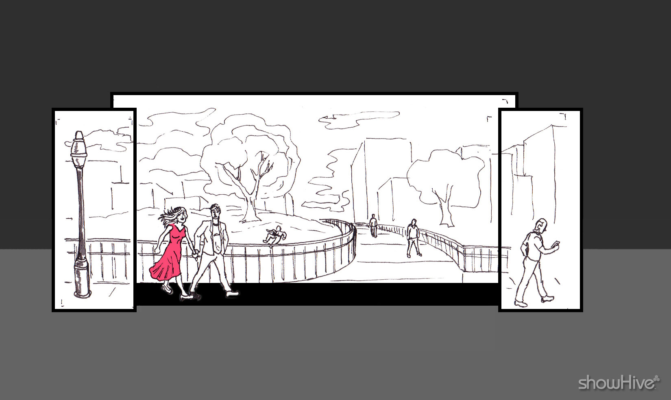 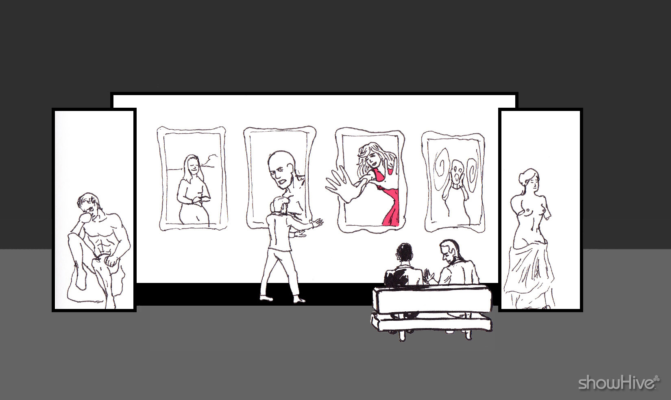 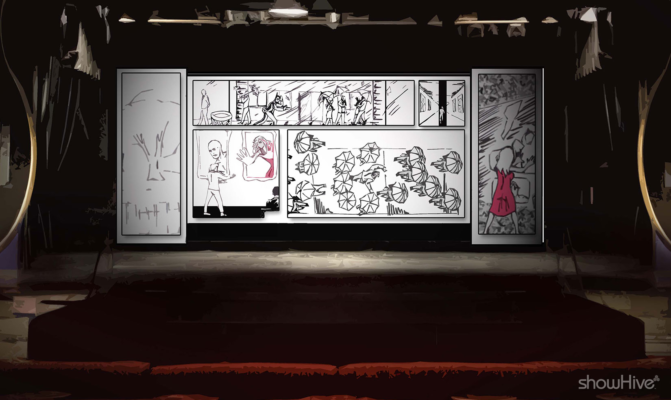 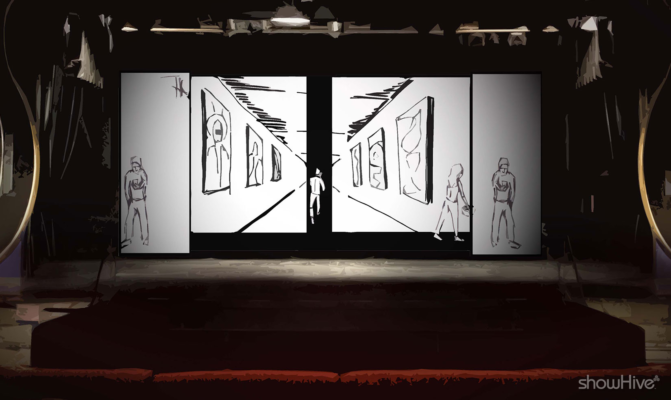 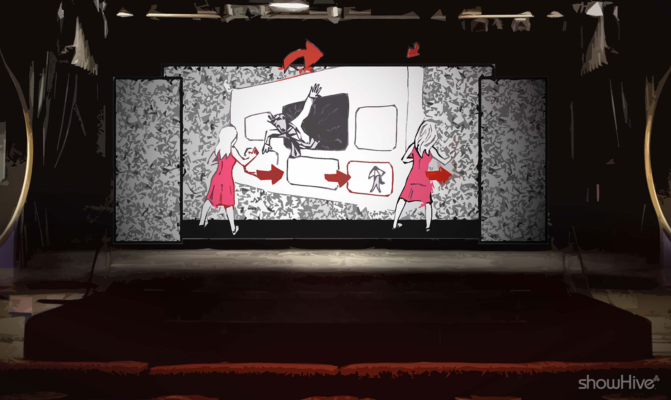 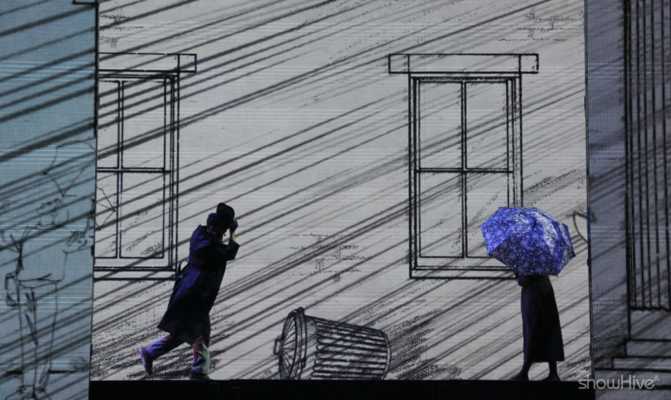 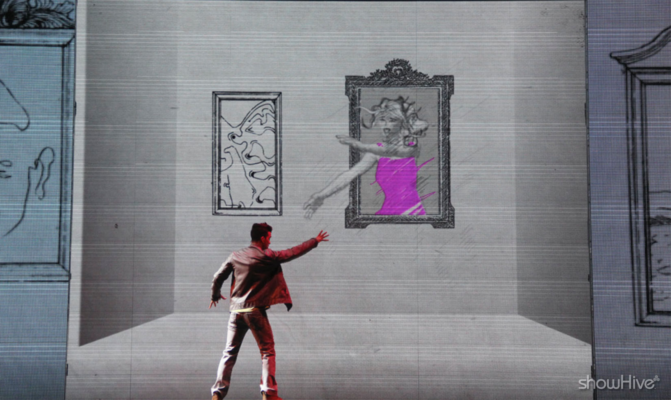 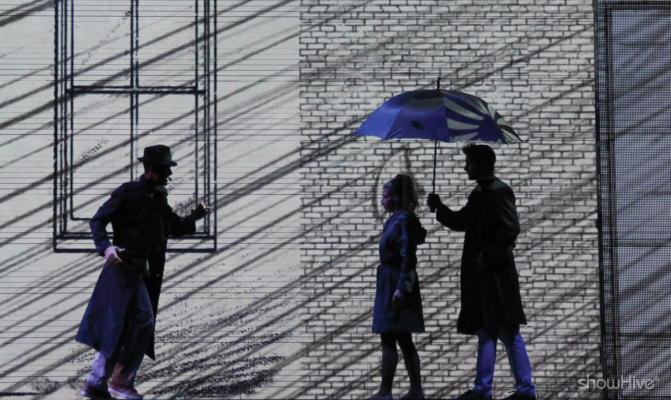 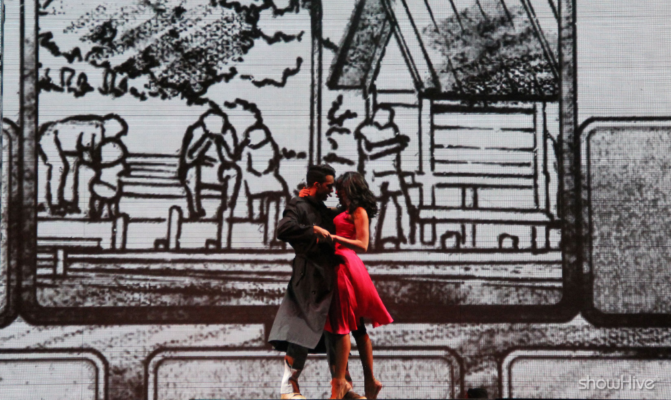 Performance video of “Take on Me”

Scripts and storyboarding are valuable tools to guide the creative team during pre-production and subsequent staging and choreographic workshops.

In order to give the technical and design team time to create their work, a show must be fleshed out from a choreographic, staging, music and concept standpoint months before the show opens. “Once you are in the studio or theater you are interfacing with an army of expensive technical specialists in a limited time frame. Every minute wasted is like burning money and potential creativity. The pressure to deliver is extremely intense, and that is not a conducive environment for an artist,” says Robert Hall, showHive’s Production Manager.

To counter the pressure, showHive invests in extensive pre-production and workshopping in order to get the creative work done in advance. Ms. Savelli notes, “Pre-production and sketching out choreography with a workshop in New York early on was really helpful. When we progressed to the digital video studio, rehearsals and eventually to the theater with the actual cast, we knew exactly what we were trying to achieve and how it integrated with the multimedia content, scenery and special effects.”

Director Emmett Murphy & Choreographer Jennifer Savelli  in NYC showHive workshop with dancers Michael Balderrama (In the Heights, Bway), Maxx Reed (Spider-Man: Turn Off the Dark, Bway) and Ellenore Scott (So You Think You Can Dance? Season 6 & 8) among others.[/caption]

The Director / Choreographer duo, Murphy and Savelli gathered a group of Broadway dancers in a New York dance studio to workshop complex scenes that incorporated digital and live performer interaction. Ms. Savelli’s assistant, Broadway dancer Maxx Reed said, “At one point there were 17 performers in one piece all dancing different choreography. But, in the final performance, most of the choreography was converted to digital projections, and the live action only had five stage performers. The workshop,” he said, “made for an incredibly smooth rehearsal process.”

showHive shows are driven by an underlying story or conceptual through-line, which is realized during the workshop process. “This doesn’t necessarily mean that there is dialog or narration, but there is definitely a world that the characters live in with real relationships,” Murphy says.

Throughout the development and rehearsal process, Murphy ensures that the through-line and concepts remain intact. Assistant Choreographer Jessica Hartman says, “Every minute counts. The creative team is given time to make sure the actors understand the story line, the energy and message that we are trying to get across. The more intricate the creative process is, and the deeper the meaning behind it, the more that it will affect the audience in the end.”

The workshops and pre-production allow showHive the flexibility to pack as many creative ideas into a show as possible. These elements need time to be produced, polished and perfected, but the final product speaks for itself.

“I am obsessed with the place where multimedia content and performance intersect,” Murphy notes. He elaborates, “Multimedia, LED and projections are undervalued, and yet, overused. If you look back at the rock concerts from the 1960s, 70s and 80s, most lit up the stage with lighting, projection, pyrotechnics, automated scenery and lasers to amp up the experience. However, rarely did these visual ‘tricks’ ever succeed in furthering the song’s meaning or band’s message.”

Over the past 10 years, LED driven video and projections have become more prolific in theater. However, the content that is pumped through them has, fundamentally, not changed. “Millions of dollars and decades later we are often caught doing the same thing that Pink Floyd, Kiss, David Bowie and Led Zeppelin were doing – psychedelic, rock-concert eye-candy,“ he added.

Garrett Caine, showHive’s Technical Producer notes, “While that style of illustrating music and bringing it to life with lighting, projections and other stage technology is a tried-and-true way to excite the audience, we understand that LED screens and projections give us the power to do a lot more.” In a showHive production, everything is driven by the story, including the multimedia.

The creative development firm works hard to push the boundaries of how multimedia and other stage effects integrate with the music and stage action. Caine notes, “This approach requires custom content that not only tells a story but is also part of the performance. Lighting is integral to bonding the two worlds together.”

showHive infuses fresh ideas, like these, into their work by involving people from disciplines outside of the theater industry.

“Out of the Box” People

Las Vegas DJ, Joseph Gettright, was tapped to create a DJ style megamix for a show. “The goal to work a high energy mix into a production show was a new and interesting idea. I focused on staying true to my vibe as a DJ and delivering music that I would at a major nightclub, but incorporated the story narrative that was demanded by the show.”

Another theater outsider, LA based voice-over artist, Appelusa McGlynn, was used to add a voice over character into a show. “I was able to Skype with the showHive team to get exactly the right ‘take’ what was needed. What is remarkable to me is that technology let’s us collaborate as artists from one coast to another.”

Working cohesively with such a diverse group of creative people is important to ensuring that the entire production is integrated. Lighting programmer, Steeve Vajk says, “showHive feels like family. Everyone knows, respects and trusts each other. We’re all working towards a common goal, and I know I can count on the entire team. We’re there to serve the client, not fight each other. But as passionate as this team is about their work, they never let their egos come before the show. Every member of the team is ready and willing to jump in and help with whatever needs to get done. We never lose sight of the big picture.”

Murphy’s interest in working with such diversely talented people is inspired by his love for New York performance art, opera, avant-garde theater, fashion, dance, contemporary music and art installations. He notes, “Exposure to this rich artistic scene fires my imagination and has been a part of my perspective from an early age. I believe that in 20 years we will look back at this era in theater and question why the entertainment establishment wasn’t more aggressive in embracing artists and ideas from outside of its ranks.”